Congratulations to the Bell High School Boys Tennis team for winning their fourth consecutive conference championship and being ranked in the Los Angeles City Championships.

This year rivals Roosevelt fell twice to the Eagles 4 to 3 and 6 to 1. Though the win over South East sealed the Eagles championship. That match went down to the last sets between Michael Mejia, partner Jesus Mendoza and the South East number three doubles before victory was assured.

This year also saw last year number one doubles player, play in the pivotal number one singles position, Farhan Mahmud.  Christopher Sosa and Jose Soto were voted as the number one doubles team. But it was number two players, Isaac Campos and number three players, Marco Felix that showed the most improvement and played doubles together in the season ending individual tournament at Balboa Park in Encino.  Marcos crushing serve and Isaac’s strong backhand were too much for the Birmingham team, winning 5-7, 6-3, 6-2.

For next year Eagles are counting on the development of Jose Zendejas, Alan Barrios, Andrew Ulloa, Armando Davolos, and Jorge Gomez.

Sadly, we say good-bye to team captain Samuel Banuelos who will be attending Dickinson College in East coast. Thanks Samuel for all your sportsmanship. Best wishes and luck.

Any student desiring to play on the boys tennis team, sign up with Coach Sune at the boys PE Office. 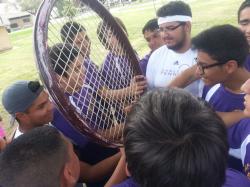